CRIMES AND CORRUPTIONS OF THE NEW WORLD ORDER NEWS (

Homeland Security has deported over 90,000 children without a parent or caregiver

Dept. of Homeland Security has deported over 90,000 children under the age of 17 to Mexico without a parent or caregiver

It goes without saying that the saddest element in the current enforcement of immigration laws is the apprehension, deportation or abandonment of children.

Stories surface every day of parents who were apprehended and fearing the same for their children, say nothing about their children at home. They hope a relative or neighbor will eventually realize their children are alone and will take care of them until they can be reunited. 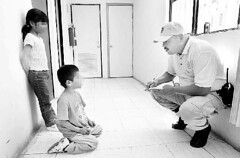 A Mexican state policeman asks the names of two children who were deported from the United States to Nogales, Sonora.
(Source: La Jornada)

According to a new report released this week in Mexico City by the Population, Border and Migrant Affairs Commission, for every three adults deported from the United States there is one child abandoned and left behind.